Archiving Ourselves: Technology and Lifelogging

Steve Mann, is generally considered to be the pioneer of wearable camera technology and coined the term “sousveillance” to describe individually controlled camera intended to subvert wide-spread institutional surveillance. Over time however, personal recording devices intended to be used to resist institutional surveillance has given way to recording devices being used as consumer products.

Ubiquitous facebooking, tweeting, and instagraming of the endless selfie, foodie or baby moments are indicators of a culture engaging in sometimes hourly, daily or weekly documenting and archiving of daily life. In some ways the constant stream of Flickr images, blog posts, and pic-twits are merely the updated versions of the analog photo album, journal and scrapbook.

This practice is increasingly supported by technologies that seem to facilitate the continuous capturing, documenting, and archiving of daily life. Lifelogging, as it sometimes referred to, involves the wearing of certain types of technology in order to capture all or large portions of the wearers’ life. Mark Krynsky provides an extensive list here of the many many tools that may be used engage in lifelogging.

Lifelogging may involve the visual capture of experiences and people encountered in day to day life. We are by now familiar with the sea of cell phones snapping photos at concerts and festivals and other special occasions. Some products such such as the Narrative Clip and The Autographer allow wearers 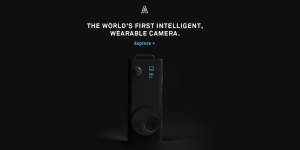 to continuously (i.e., every 30 seconds with the Narrative Clip) and automatically captures images unfolding around them as they move through their everyday lives.

Lifelogging may also involve the collecting of information related to the body, such as sleep patterns, physical activity, weight management and even the quality of day to day moods cross referenced with activity. Samsung’s Gear Fit, Fitbit and Mood Panda are technologies that aim to collect body related data.

Reviews of these products suggest that such devices, while convenient and responsive, tend to raise complex issues related to privacy and disclosure and at times made both the wearer and the device subjects uncomfortable. For example, it is possible to wear such devices in such a way that people around you are not aware that they are being recorded. However, peers, colleagues and friends may feel that their privacy is being intruded upon.

Lifelogging promises to help us preserve important personal memories; increase our ability to remember things both in the short-term and the long-term; and aid in the scientific exploration of the connection between memory and well-being. This said, such technologies push important ethical and legal issues to the fore. With respect to the law, while it is permissible to take photos and videos in public spaces for personal use in many countries, these laws tend to vary by place. However, even though something may be technically legal, this does not make it socially appropriate or ethical. For instance, many people feel uncomfortable being openly recorded with such devices as Google Glass (think: “Glasshole”). Such technologies have the potential to shift our present understanding of what is regarded as socially acceptable uses of ubiquitous recording devices and will force us to balance our right to privacy and our strong desire to preserve our precious memories.

The latest news on WordPress.com and the WordPress community.